Your shopping cart is empty

Being young, I’ve never noticed any differences except in people’s personalities. Some were nice, some were smart, some thought they knew everything, and other thought they owned everything. My mother made sure I had everything I needed, and I was cared for. With the years going by, like every teenager, I started to question things, trying to make my mark in the community I was part of. Deep inside me, I knew the question not to ask. I was never told not to, but the depth in the eyes of the ones leading us were very clear to me. I was living among wood elves where my mother belonged. I had black hair and blue eyes like a lot of them but my skin was dark. For sure, I stood out. I was one of the tallest elves as well, so I was quiet, blending myself with nature, avoiding being seen.

One evening, being alone at home with my mother, I took the decision upon me to break the silence. I approach her and simply ask: “Who’s my father?”. Shocked at that word being shaped by my lips, she stood there without breathing for what seemed an eternity. My mother looked straight at me with her piercing eyes and, without even blinking, stood up and faced me. Her mouth barely opened, and those words were spoken: “We. Do. Not”. Then she closed her lips as hard as she could. She had more to tell. Will I ever find out? I know I won’t, not tonight, not from her.

Our community celebrates adulthood, everyone came, everyone enjoyed each other. Becoming an adult meant I could make one demand to the elders. That demand had been used in the past to establish the new adult’s future depending on one’s interest in the community, rather be military-like most, or more of the nature side. I knew a lot about nature. That’s the side she took when it was her turn so long ago. That day, I helped everyone prepare the feast; I enjoyed being of service. The evening came, they all came, we all ate, we all danced, everyone was happy. I showed happiness until they brought me in front of them to make my demand. My heart was beating faster and then paused. I looked at them and asked: “Who’s my father?”. Even the wind stopped moving among the trees. Life itself had stopped.

With all the elders now standing with their hands ready to pull out their swords, I heard a voice, coming from the one elder who, I didn’t see still sitting there: “He’s human”, the voice brought peace like a warm summer evening before a heavy storm. They all sat, and he rose: “He met your mother, you came, he left, and died.”. “How did he die?” I exclaimed. “Enough!” came from another elder. I was then told I was out of place; I was lucky to be here, even though most thought it was a mistake. I looked over the disappearing crowd, but I couldn’t find her to support me. I was going to be left alone with them. And alone I was. That loneliness brought me courage and strength. “How did he die?” using a more demanding tone this time. “With your audacity, what you may call courage, we will tell you, and no longer will you be welcome here or among us.” declared that 2nd elder. “Because of his ego and greed, and to maybe giving you a chance of hope, we all killed him.” The place became dark. I couldn’t see anyone moving. I don’t think I was moving either except my thoughts trying to understand what I have been told. Slowly, I saw lights giving a dim detail of a path leading out, far outside of here. I walked slowly but straight, passing one light at a time, leaving the ones behind dimming completely off. I could hardly breathe, but I kept walking, standing straight. I knew of loneliness, but fear not knowing my past nor my future will bring me to the death of my soul while my body still lived chilled my bones.

Several years had passed, I was alone and not lonely. Surround by nature, I traveled were my feet, and sometimes my stomach would lead me. I have met some people in the distance and exchange a few words with a handful of them. I stayed to myself, exploring the forest, the shore, and finally the mountains. There, I climbed as high as I could, discovering the vast land I could see and knowing I had seen it all in person. It was getting colder, the air was harder to find, I had to hurry for warmth and slow down for oxygen. It brought peace to my mind. That duality was interesting to me and reminded me of me being part human, part elf. Reaching the top, I discovered some construction, spread out on cliffs. I had to get closer and gain back some heat into my body. I found a few people there around a large fire. No one was speaking or even looking at each other. I sat around the fire, with them, invisible, and alone. I think I’ll stay here for a while.

I have been in that monastery for a very long time, I take part in its silent and slow community. I learn again, through time, to socialize around them. I learn about their deity Lathander, the god of birth and renewal. I discovered more about life and light and the hope it provides. My past disappeared behind me as well as its chains, leaving me accepting a future with open arms. They held a ceremony, bringing everyone together, to pray to Lathander to remove all the weight of my past and gain a new purpose in life. As the ceremony continued into the evening, a light appeared among us. It was not strange, we had seen similar events before, but what came next brought me here, now. The light continues to grow, stronger, and slowly, then suddenly the brightness of it prevents us from seeing. Everything was shinning, I even felt my body glowing and losing any form of mass. I was ready to explode and to be transfigured into light, when I hear a voice: “Your future awaits to meet with your past, see your father, go to Fardea.” The darkness of the stars replaced the light. My body felt heavy and weak. I fell to the ground on my knees. Looking around, everyone had the same experience. They all looked at me. I prepared myself and the next day I headed to Fardea with the hope of maybe meeting my father. How could that even be? 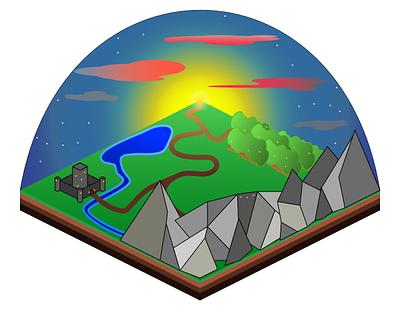